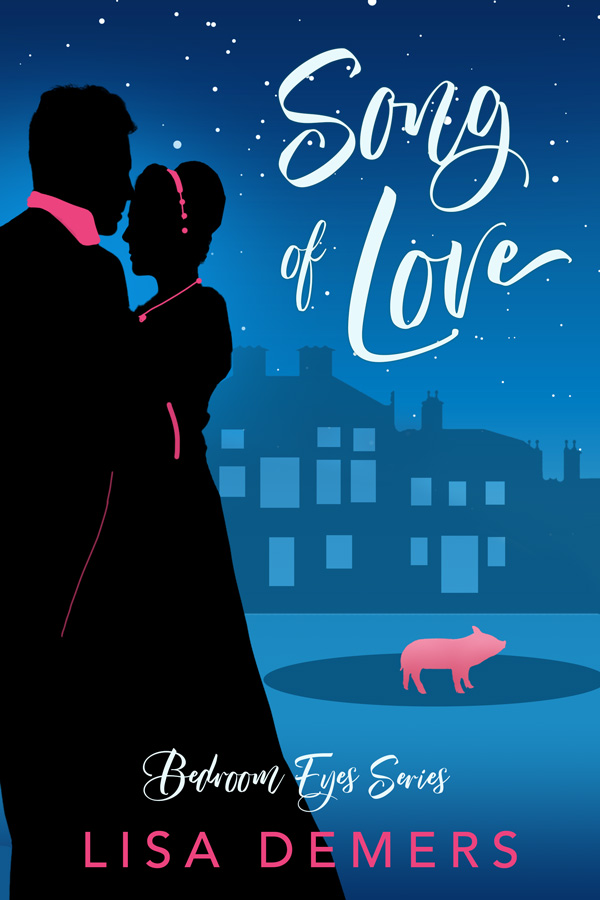 Sometimes heroines are beautiful, smart, and tackle the world. Sometimes, they see the world with a different pair of eyes. They’re neither bold, clever, nor assertive but find their own path in life. One that involves piglets.

Miss Augusta Rudhall loves her home, playing the piano, and the yearly litter of piglets in the barn. She doesn’t understand people. They never say what they mean, often saying sweet words when their intention is to be cruel, can be unfaithful friends, and she has difficulty figuring out how anyone feels. Yet, she has been told she must marry because her interloper cousin Roger will inherit everything.

Nate Fairchild loves bawdy women and bawdy songs. Mostly, he loves the music of ordinary folk and has spent years in London collecting the songs of the common people. During a stop at a brothel, he runs into a girl in disguise, discovering ‘Gus’ has inexplicably followed her father there. He hurries her out.

At a party the next day, he finds Gus weeping in the garden, having been hurt by someone. But offering her his handkerchief and a pat on the back ends up compromising her. Both their lives are uprooted as neither knows anything about the other. Can two more incompatible people find love?

She had a favorite tree, a gnarled old apple that grew just outside of the pig barn way off past the dovecotes. Two large branches stretched out over Madge’s pen. The estate had two sister sows, Madge and Henny. Every spring, they gave birth to an enormous litter of piglets, and she delighted in monitoring them as they grew and began to explore their world.

Augusta often scrambled up the tree to watch. One branch was shaped like a chair to lounge on and allowed her a comfortable seat to observe the piglets in play. When first born, they were remarkably tiny compared to their mother. Each little one was no larger than the length of her forearm with loose skin over bony frames. But Mama Madge fattened them up quickly. She would grunt and called the piglets to come to feed, who eagerly lined up at the bar. Madge’s piglets were most often white with black spots. Sometimes, the father was a different boar than old Nemo, and the mama sow had golden chestnut babies with black spots. Augusta adored all of them.

For years, Madge was her secret-keeper. On the day before she left Rudhall, she didn’t bother climbing the tree. The piglets were a month old, more than doubled in size, and seized with curiosity about everything around them. Gus climbed into the pen to scratch backs and bellies before telling Madge about her sharp-tongued Aunt Julia and the usurping Roger. Even though he was fifteen, he was an object of frustration because he was taking everything away from her.